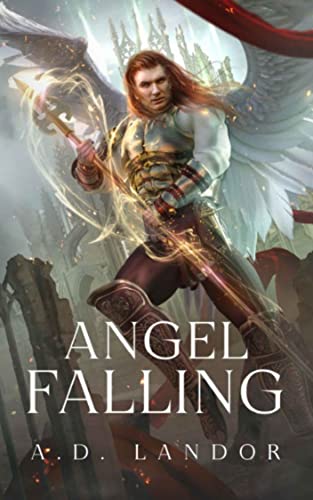 The war between the Angels of Judgment and the Vampiric Succae – a race of honour-bound demons – was over.
Everyone was safe … for a while.
ANGEL. SOLDIER. ASSASSIN. DIPLOMAT. FOOL?

Azshael is an outcast lost in remorse and shunned for falling in love with the enemy. Unexpectedly tasked with investigating the death of a Succae elite on Angelic soil, it quickly becomes personal when he discovers her murder bears similarities to that of his dead lover.

Seeking answers, he joins forces with the Succae Serrate Lytta, an ancient war spirit bound in flesh, and the potent pair unearth a conspiracy which could destroy the long-standing truce and reignite the war between good and evil.

As a day of reckoning looms, Azshael will need all his wits to survive. But surviving is the one thing he’s always been good at.

He’s not the ‘dead angel walking’ his enemies think he is.

They picked him to fail, but they chose the wrong Angel…

Avenging angels, delivering judgement to alien worlds across the universe, have an uneasy truce with a species of vampiric demons. Murder, political intrigue, and monsters stand in the way of our anti-hero, Azshael.

The lore and world building is very interesting, and something that I would have liked a lot more of, especially that of the Succae, the vampiric demons. Their culture and lore has so much more to offer, which we will hopefully get in future books in the series.

I really enjoyed the Angel culture and the different rankings and roles of the heavenly host. I really enjoyed this take on Angels vs demons, and placing them all in a political, crime thriller was a great move by the author.

Azshael is an entertaining character. He’s like a superhero, with his angelic powers, and his magical spear – Nimrod. I enjoyed the action scenes, especially the fights between Azshael and some of the monstrous creatures he comes up against.

There were times when I felt the story moved a bit too quickly, jumping to a new line of investigation, leaving me a little lost. Overall the plot worked well, but there were a couple of moments of confusion for me.

The ending is satisfactory, leaving the door wide open for more adventures for Azshael. Whether future books will take place in the same world or elsewhere, there is so much potential for more stories within this universe. The possibilities are endless!

Angel Falling will be a sure fire hit for anyone who enjoys dark fantasy. And if you enjoy classic crime noir too, then you will love this entertaining read. I could see this book being a great graphic novel – so, if you like your fantasy like that, then this one is definitely for you.