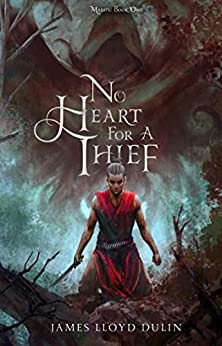 We are the stories we tell ourselves…even the lies.

The Thief, a great spirit, and her descendants have abused their ability to steal magic for centuries. When Kaylo starts to hear the song of other people’s magic, he must learn to hide from his people as well as the invaders. A gift or a curse, Kaylo may be able to save his people from the Gousht Empire that claimed their land with this stolen magic.

Eighteen years later, Kaylo still prays to the spirits, but not out of loyalty or love. He knows better than to rely on those selfish bastards for anything. While hiding in the forest from his foolish acts of rebellion, he encounters a girl, Tayen, being pursued by two soldiers of the empire. Against his better judgment, he risks facing the consequences of his past to intervene.

When Tayen attempts to run off seeking vengeance for her family, he offers to train her to wield her magic and a blade. If he can’t convince her to relinquish her need for vengeance and stave off the demons of his past, he’s going to get them both killed.

“No heart for a thief, no safe haven, only a grave will do.”

This book is due for release on January 24, 2023. I received an ARC from the author for an honest review.

No Heart for a Thief is a thought-provoking, allegorical coming-of-age tale that swept me away on a moral and spiritual journey. This novel does what SFF works do better than any other genres of fiction; exploring difficult real world and historical truths through fictional stories. This is what I love most about fiction, and this debut is a great example of how to take difficult themes and challenge them through a fictional tale.

The story shifts between present and past throughout the book. It begins in the present with Tayen and her encounter with Kaylo. What I believed was going to be Tayen’s coming-of-age story, turns into a dual-narrative where we shift to Kaylo’s telling of his own coming-of-age story to Tayen. At first, this was a sudden shift from the story set in the present and I was eager to return to that story arc. However, the deeper I travelled into Kaylo’s story, the more I wanted to return to his tale when the author shifts back to the present. Some readers may find this a distraction, and find one timeline more enjoyable than the other, but I found that the balance of the two narratives worked well, and necessary to the overall narrative.

One of the real highlights of the story for me is the magic system. The magic, The Song, is a spiritual and elemental magic system, heard like music to its users, known as Dancers. Without giving away too much, Kaylo’s use of this magic system is key to the story and his inner turmoil and exploration of good and evil.

Kaylo is a fantastic character, and the story benefits from seeing things through his younger and older eyes. Kaylo’s backstory is what really drives this story work and benefits the world-building. The themes explored by the author are very real and challenging issues that resonate in the past and the present, both in the story and in our own world today. Racism, colonialism, power, religion, slavery – all of which, I believe, are handled with great empathy and consideration for their impact.

At no time did I think the author, or the story, was preaching any bias or agenda; the character work and story is delivered in a way that allows the reader to think about the answers to the difficult moral questions posed by the story.

This is a distinguished debut that I found completely engrossing. As a work of fantasy, it is a very promising start to a series that has a lot of potential. I enjoyed the structure with the two timelines. Kaylo’s journey, both in the past and present, is one I want to continue. No Heart for a Thief is a meditative, spiritual journey that will make you stop to think and question – an allegory for our times.