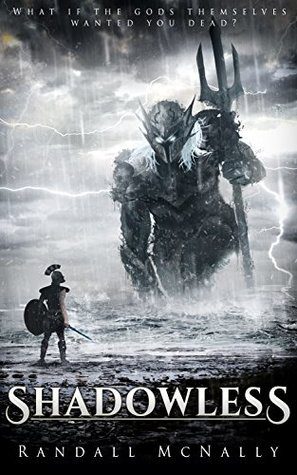 What if the gods themselves wanted you dead?

A young boy lies on a beach on a warm summer’s day. While trying to block the sun from his eyes Arpherius makes a shocking discovery; he has no shadow. Confused and bewildered he asks his uncle why he is shadowless. What he learns is a terrifying secret that will change his life forever.

Set in the Northern Realms, Shadowless is a fantasy novel about individuals born without a shadow. Spawned by the malevolent deities of this world these children of the gods are persecuted at every turn. Hunted by the high priests who carry out the wishes of their gods, hunted by the Shadow Watchers; armed soldiers who are assigned to each temple, and hunted by the gods themselves.

Part-mortal and part-god, the Shadowless live for centuries and face a battle for survival, constantly on the run or hiding in far-flung corners of the Northern Realms.

Soon their lives and fates become intertwined, expedited by the mysterious monk Amrodan. Driven by a series of visions Amrodan travels through the Northern Realms, seeking out the Shadowless and trying to enlist their help to take a stand and fight back against the gods.

This novel was unique for me in the way that it was written. The world and characters are introduced in the form of short story chapters, each very different and unique. This is a risk that paid off for me. I was interested to see where the author would take us with each new entry, introducing new powers, characters, and perils. A few common themes begin to show as each entry is shown, linking them together in ways that are unique and interesting. There were some that I liked more than others, due to the powers and abilities they had more than anything.

The strength of this novel is the vast cast of characters that we are able to read about. Each is as unique as the powers that they wield. This allows for readers to all find a character that they can relate with. The small thing that bothered me was that it was hard to see what the overall plot was, as time would jump between the characters as we read in different part of the world each time. This mainly affected how the characters all of a sudden interact with each other, not seeing how the relationship truly develops.

This is a unique ride, full of peril to all of the characters as they look to survive the wrath of the gods and their followers. It takes a lot of my favorite kind of abilities and introduces them in new ways, making for a fun and engaging read. It was nice to feel like each chapter was a finished story, giving a sense of satisfaction at each new chapter. Find yourself cheering on some new characters as they look to take battle to the gods themselves.

Thank you for taking the time to read my review. As always. happy reading and Stay Great!!