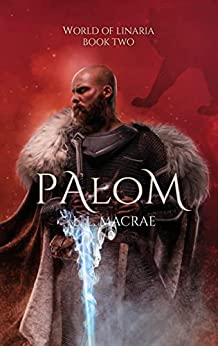 ‘Now the fighting’s over, you want to pick up where we left off? How? Everything’s changed.’

Linaria’s cities lie in ruin and her lands are scarred following Aciel’s war. The devastation worsens as dragons turn against the survivors in retribution for Aciel slaying their kin and stealing their power.

As the world attempts to recover from one global war and arm itself against another, Palom, hero and creator of the dragon-forged weapons that thwarted Aciel, flees across the Val Sharis wilds to rid himself of unwanted fame. Overwhelmed by guilt for failing to protect loved ones, his greatest threat is not just the weapons he created, but the new shadow growing over Linaria.

He is accompanied by a dragon hatched in his care – but with the god-like creatures turning against the world, will she be his salvation or destruction?

Discover new friends and rejoin old ones in World of Linaria – Book Two.

Palom is the second novel in an epic six-book saga, following a group of characters as war rages across their world. With pirates and soldiers, smiths and princes, Linaria is a vibrant land with a deeply unsettled past and an equally ominous future.

Palom is a fantastic follow-up to the first book in the series, Moroda. The author takes the world-building even further in this book. As we delve deeper into the world of Linaria, we discover new, wonderous places, fascinating history, ancient artefacts and beings, like ice golems, and get to learn more about the diverse cultures that inhabit the world. The world of Linaria is rich in detail. You feel the chill of the snow, the smell of the markets, the noise of a battle; the author has a wonderful knack of fully immersing you in her world.

We pick up the story almost immediately after the events of book one. The story follows multiple POVs with three main focal points. Amarah and Kohl, Sapora and Isa, and Palom. Amarah is by far the most entertaining and interesting character, and my favourite from the first book. I enjoyed her journey with Kohl and the development of their reluctant friendship. Sapora and Isa are like two sides of the same coin. I loved the political tension and plotting that happens within the city, and the element of mystery and jeopardy that this particular arc carries. Finally, we have Palom’s character arc, which I found to be extremely well done throughout. Along his physical journey we are also exposed to his mental journey too. His grief, fear and desperation is felt keenly. I felt that his magical sword became a physical manifestation of his mental burden, like the black dog of depression over his shoulder. I really enjoyed this aspect of his story.

Palom is a great example of how to follow up a first book in a series. It manages to answer some of the questions from book one, whilst presenting several new ones that perfectly set the stage up for book three. L.L. MacRae has quickly become one of my favourite authors. With her superb world-building and writing style, that allows the story to flow with ease, I can’t wait to return to the world of Linaria.