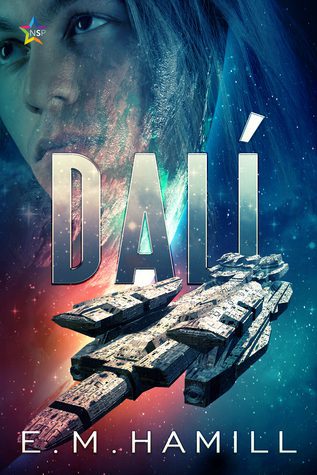 Dalí Tamareia has everything—a young family and a promising career as an Ambassador in the Sol Fed Diplomatic Corps. Dalí’s path as a peacemaker seems clear, but when their loved ones are killed in a terrorist attack, grief sends the genderfluid changeling into a spiral of self-destruction.

Fragile Sol Fed balances on the brink of war with a plundering alien race. Their skills with galactic relations are desperately needed to broker a protective alliance, but in mourning, Dalí no longer cares, seeking oblivion at the bottom of a bottle, in the arms of a faceless lover, or at the end of a knife.

The New Puritan Movement is rising to power within the government, preaching strict genetic counseling and galactic isolation to ensure survival of the endangered human race. Third gender citizens like Dalí don’t fit the mold of this perfect plan, and the NPM will stop at nothing to make their vision become reality. When Dalí stumbles into a plot threatening changelings like them, a shadow organization called the Penumbra recruits them for a rescue mission full of danger, sex, and intrigue, giving Dalí purpose again.

Risky liaisons with a sexy, charismatic pirate lord could be Dalí’s undoing—and the only way to prevent another deadly act of domestic terrorism.

Dalí is a full-blooded, adrenaline soaked, science fiction romp that had me hooked from the very first line. Dalí is an incredible protagonist. A ‘third-gender’ changeling, bereft from the loss of their husband, wife and unborn child, Dalí takes us on a fast-paced espionage-style thriller across the galaxy.

The plot has content that some readers may find distressing. I thought that the difficult subject matter of gender rights, human trafficking, slavery, and suicide were all handled extremely well; I find that science fiction is the perfect genre for exploring the most difficult questions and issues we face in our society. The author accomplishes the difficult feat of writing a thrilling science fiction story whilst also covering some very complex and sobering themes.

I should also mention that Dalí has some explicitly described sex scenes. The first couple of scenes did take me a little by surprise, as it’s not something I usually encounter in the books I read. However, the scenes are not prevalent throughout the story and do play a key part in adding extra layers of understanding to Dalí’s personality and physiology. The later scenes, between Dalí and Rhix, are fascinating, with them being less about the sexual content and more about how the experience impacts the changes on Dalí’s physiology.

The only minor quibble I have is that I would have liked more development and page time for the characters of Gor and Sumner. We are introduced to these characters early on in the story – Gor, a childhood friend of Dalí’s, and Sumner, who recruits Dalí into a secret organisation. Both characters are really enjoyable, but far too fleeting in their involvement. That being said, their involvement was enough for me to hope that they have more page time in future books in the series.

Despite my personal disappointment of not having more time with some of the characters, the introduction of Lord Rhix more than makes up for it. He is such a brilliant character – the misunderstood, morally grey, villain, who you end up rooting for. I really hope we see a lot more of him in future books too.

Dalí is a brilliant entry to a series that I will definitely be continuing with. If you enjoy science fiction with a strong and unique main character, political intrigue, terrorist plots, revenge, espionage, pirates and undercover operations, while also covering the difficult subjects that are relevant in our society, then this is definitely a book I can recommend.