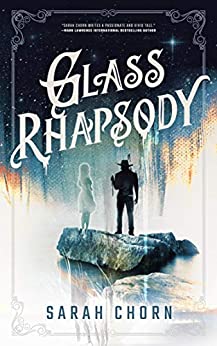 Five years ago, the Boundary fell. Now the Union is coming to claim Shine Territory as its own.

But not everyone wants to live under their heel.

In a hidden town run by women with rough pasts, life remains untouched until greed paves the way for conflict. Faced with few choices, Grace Hart must stop the Union to protect the women under her care.

Elroy McGlover has spent the past five years running from what he’d done in Matthew Esco’s name. Haunted by ghosts from his past, he returns to where it all went wrong. Enlisted to help Arlen Hobson fight against Union control, Elroy soon finds himself in the middle of a war for the heart of Shine Territory.

In the fight for the soul of the West, no one is innocent.

Glass Rhapsody brings together characters from Of Honey and Wildfires and Oh, That Shotgun Sky in the climactic conclusion to this astounding series.

Through the points of view of Cassandra, Arlen, Elroy and Grace, we are taken on a visceral journey of grief, guilt, fear, hope and love. There are truly heart-rending and beautiful moments between the characters. The grief and struggle between Arlen and Cassandra over the five years, from their first meeting to the present day, is one I am so glad we got to explore in this book.

The relationship between Arlen and Elroy is one of standout aspects of the book for me. It is so delicately and perfectly developed throughout the story. Their pain, their remorse, their yearning, is laid bare before the reader with such sincerity and tenderness.

Elroy’s journey is my personal favourite. There are so many aspects to his character – his struggle is both physical and mental; his wounds, internal and external. His POV also gives us more of the fantasy elements to the story, where we learn more about his Shine dependency, and the effects it has on his body and mind. One such side-effect being the ability to see and speak with the dead. I found these moments added an extra layer of understanding to past events and the overall emotional journey.

There are so many wonderful things to take away from this story, both tragic and hopeful. Grace, who we meet in Oh, That Shotgun Sky, has moments of immense panic caused by her past trauma. The way in which her moments of panic are described is so vivid, my heart broke so many times for Grace’s predicament.

Glass Rhapsody, and The Songs of Sefate series, has an overriding elegiac quality, with enough glimmers of goodness, hope, joy and love to provide light at the end of the tunnel.

It is impossible to satisfactorily put into words how much I loved this book and series. The empathy I was able to feel with the characters was profound, a direct result of the author’s eloquent and lyrical prose. Sarah Chorn‘s prose will cut you deep, leaving your bleeding heart exposed; her prose will permeate your soul, giving rise to a cathartic experience.