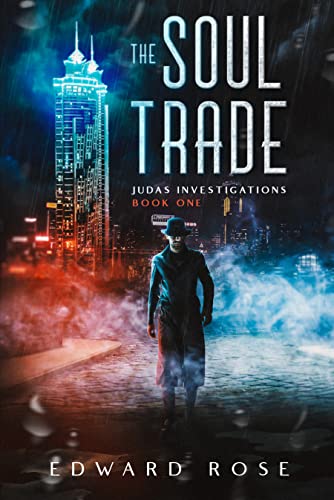 When you’re the one and only Private Eye in Purgatory no case is going to be easy, but when a lost young woman walks through Patrick Judas’ door things take an even more dangerous turn than normal.

The City he calls home might be full of the worst people north of Hell, but there have always been rules. Live a good life this time around and your final journey in the great Elevator might take you to a better place, live a bad one and… well you get the idea.

But now someone is breaking those rules, switching the fates of decent people with the worst scum in the City – and Judas’ new client seems to be caught up in the middle of it all. With only his wits, a foul-mouthed cat, and the help of the scariest receptionist in the universe, Judas will have to risk everything to save the City he hates.

I was drawn to The Soul Trade by its cover and blurb, after seeing it listed as a SPFBO8 (Self Published Fantasy Blog Off) entry. Despite not being my usual genre of choice, I thought I would give it a try.  This is an urban fantasy written in the style of a crime noir novel.  The writing has all the hallmarks I would expect from a noir novel – a gritty urban setting, a morally compromised protagonist, mystery, and a bleak outlook on the human condition.  The fantasy elements add another interesting layer to the story, with daemons and magick (with a k) included.

The story is told solely through the main character, Patrick Judas. We quickly learn that he is the only PI in the City, which is literally purgatory. All the souls in the City arrive without any memory of their life before, with only a name given to them when they arrive.  Everyone conducts their ‘lives’ in the city, awaiting the ultimate judgement of the mysterious Elevator, that will take them up or down.

Judas’ narrative is really well done.  His sardonic delivery and wry wit fits perfectly with the noir style. His past life, before purgatory remains a mystery, but through his narrative he provides the reader with snapshots of information and explanations for things relevant to the City and the main plot of the story.  Although there is more telling than showing within the narrative, which I don’t usually enjoy, I think it is done well by the author here; through digressive anecdotes, we get background on Judas and the City throughout the narrative.

The main plot is a good old fashioned mystery involving a girl, corrupt police, disreputable club owners, and gang-land bosses. Throw in the fact they are in purgatory, with daemon possessed goons, a supernaturally powered henchman named Cain,  magick, and a talking cat, then you have a very entertaining and fast paced story.

The other characters serve to add to the noir setting, and there’s enough mystery surrounding some to set up further books I feel.  I would have liked more time spent with Samson, the talking cat. I think a novella for his story would be worth reading!

The only thing that didn’t work so well for me was the magick. Although used sparingly throughout the story, due to its negative after effects on the user, I felt that it could have been given a better reason for being present. Sometimes it felt that its inclusion was merely for convenience in certain situations. However, this is a personal opinion and I’m sure others will find it works for them; it didn’t affect my overall enjoyment of the story.

The ending was satisfactory, but did leave some unanswered questions and a few loose ends that might leave readers disappointed.  I felt that there was enough at the end to be satisfied with, but I would have liked more details on certain aspects about the City (Purgatory), the reasons for the names given to people when they arrive there, and what they had done in their previous lives.

The Soul Trade is perfect for anyone who enjoys urban fantasy within a noir setting. The story is fast-paced and entertaining, with enough mystery and intrigue to keep you turning the pages to the very last one. It is a quick, easy read – a good introduction to a series that has the potential for more.