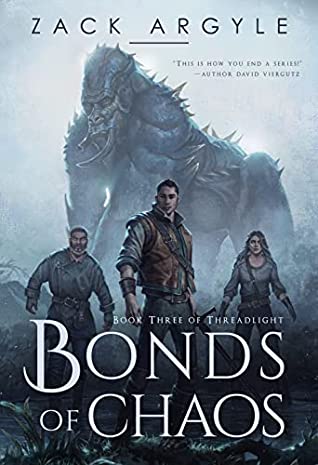 Bonds of Chaos is the final installment of the Threadlight trilogy, which begins with the multi-award-winning Voice of War.

TO BREAK THE BONDS, THERE WILL BE SACRIFICES

When all was lost, the Heralds returned, and the world embraced them as gods and saviors. But there are some who know the truth: the Heralds are not what they seem.

Now, in a desperate attempt to stop them, Chrys and the others travel to Cynosure with hopes of enlisting the only Amber threadweaver with the power to help.

Chrys, Laurel, Alverax, and those they love.

Together, they will stop the gods…or they will die trying.

A fitting end to a fantastic trilogy. Once again we are shown this fantastic world from the views of the characters that we have come to love and admire over the course of the previous two books. It picks up right from where the previous book had ended, the action immediately keeping the reader engaged and on the edge of their seat. The family ties that are so dominant are strengthened in all of the ways that they deserve to be. The war that will happen for the reader is the question of if they should eat or sleep versus just pushing through in one sitting.

Once again the strength of the author is the relationships of the main characters with each other, creating those bonds of family that have been prevalent throughout the series. There are a few instances where I felt pulled away from the conflict that was happening into a viewpoint that was different but it did not ruin the story in the slightest. There is a heap of praise that this book deserves and I add my part to this pile.

The sacrifice must be made to make time for this gem of a book! This will leap to the top of many lists, and it deserves to be at the top. The trilogy is concluded in a surprising but very satisfying way. The war and battles that are waged will keep the readers thirsting for more, the images vivid and vibrant as the Threadlight that flows through the veins of the characters. I could not have asked for anything better.

Disclaimer: I received an ARC in exchange for a fair and honest review.