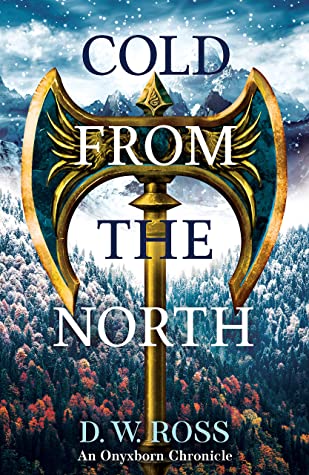 Driven by the promise of an ancient prophecy which will bring the dark ways of an old god back to power and prominence, an army of invaders swarms Ogulf Harlsbane’s homeland slaughtering all those who oppose them.

Along with his people, Ogulf must seek refuge from this savage force. In his search of sanctuary, he is tasked with finding the one person who can put a stop to the onslaught.

Doing so will send him across lands and seas, have him and his closest friend navigate the intricacies of a civil war, and try to win the help of the princess fighting for her throne.

If he fails, darkness will prevail and the reign of the Onyxborn will begin.

Cold From The North is an adventure filled with Norse origins, prophecies that want to be fulfilled, and action that keeps you on the edge of your seat. I had heard amazing things about this book; overall, it lived up to the hype. It quickly throws you into the action, creating a narrative that will keep the pages turning at a rapid rate. It takes the idea of a prophecy and changes it into a side that isn’t told as often. There is heartbreak, there is intrigue, and there is magic.

The core group of characters are great and a joy to read. There is a little bit of convenience to the side characters that just happen to give the cast exactly what they need in the exact right time, but this is a very minor issue. It is a minor thing that doesn’t pull away from the beautifully told main story line. I found that the world that was created to be the overall strength, feeling the cold and the panic of an invasion that can’t be stopped.

Cold From The North is a classic fantasy that will take you by surprise on how fast the pages are turning. It is a fresh taken on some common tropes that is told with a voice that feels as if it comes from a well seasoned author. This will be a book that will endear itself in the hearts of many readers. Don’t get caught out in the cold by missing out on this one!

Thank you for taking the time to read my review! As always, happy reading and Stay Great!!