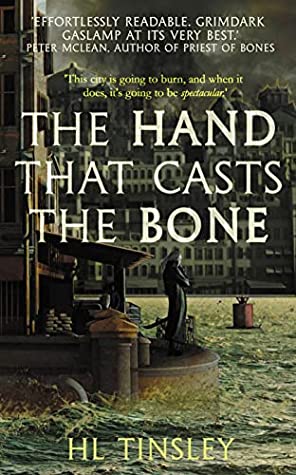 ‘It was funny how everything came down to resources. Who had them, who wanted them, and who would die for them. That was the thing, when you cast a bone into the dog pit to watch the hounds fight; it was not the strongest dog that won. It was the hand that cast the bone.’

Alone in a city on the cusp of revolution, separated from his allies and with nothing to his name, former mercenary John Vanguard finds vigilante life can be a poorly paid gig. When an influential aristocrat’s death causes a sudden shift in the balance of power, Vanguard finds himself once more caught in the crossfire between dangerous men with murderous ambitions.

From his tower far above the city, Captain Sanquain seeks to tighten his iron grip on the capital and its citizens. Amidst the chaos of the Black Zone, a deadly turf war is brewing between the crime lords. Outside the city, libertarian Argent Cooke struggles to gather support for the uprising. And from the smog-stained rooftops, Vanguard’s former protégé Tarryn Leersac is watching all.

With any hopes of redemption fading, Vanguard finds one last shred of hope in the form of an old friend, risen from the dead and promising the chance for atonement.

What a way to continue the stories of characters that pull on the heartstrings. Once again, H.L. Tinsley takes into the heart of the world, full of dark corners and just the slightest glimpse of light in the form of hope. It was great to jump right back in shortly after the events of the first, once again returning to familiar viewpoints. Vanguard is the kind of character that talks to readers, silently cheering him on, knowing full well that if they met him in person, they would be on the opposite side.

The political aspects of this novel are a great strength, causing for multiple ways of trying to think of what could possibly be coming next. It keeps the reader turning pages, constantly becoming complex in all of the right ways. The only thing that I really want more of is more knowledge about the powers that Vanguard seems to possess. It is intriguing and makes for some interesting action sequences. The heart and soul of this book is how the characters overcome the darkness that pushes in on them at all times, yet they fight to live their own lives.

Once again I truly enjoyed my time in this world. It is brutal. It is dark. It is great gaslamp fantasy! The character work of each and every one is profound, as they all have their motives for what they do. It is a great aspect that allows the world and characters become even more real. I eagerly await to once again immerse myself in the world of Vanguard and his associates. You may not have noticed how good it is, but the tabby definitely reminded you.

Thanks for taking the time to read my review! As always, happy reading and Stay Great!!