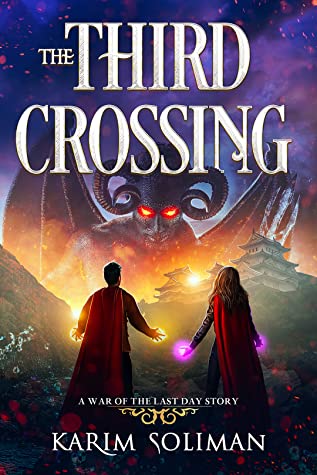 The drums of war are beating in Koya. By the Light’s will, the Red Cloaks shall cross the sea under His holy banner, the ancient homeland will be restored, the slaughtered ancestors will be avenged, and the damned occupants shall all perish.

By the Light’s will, the Third Crossing shall happen.

Akira will be one of the heroes of the upcoming holy war; that’s the seer’s promise to his mother. He will outshine his fellow mages, don the red cloak, and join the Light’s own soldiers. He will bring victory to his people and honor to his family, clearing its name from his father’s shame.

Or that’s what Akira thinks. Because seers can be devious sometimes.

From the rural side of Koya enters Natsu as she assumes her late husband’s place and takes the smuggling underworld by storm. Her shocking rise provokes not only the Koyan navy, but also her rivals, and a fierce war ensues on land and sea. A war she can only win if she shakes hands with the smugglers’ deadliest enemies; the Red Cloaks themselves.

For honor and coin, Akira and Natsu will forge a shaky alliance, both knowing that one of them will eventually have to betray the other. Trust could be a grave mistake in these dark times of war. If you wish to be the last one standing, you must be ready to be the first to stab in the back.

Disclaimer: I was provided an ARC in exchange for a fair and honest review.

The Third Crossing is an interesting book full of magic and backstabbing. It focuses on two main POV characters that have their own story until they unexpectedly come crashing together. Both plot lines are interesting and have their own perils to keep the reader interested and wanting to know more. There were times I was taken by surprise with what was happening on the pages. The characters are the true strength of this novel.

It did take me a little bit to become fully invested in the novel, about a quarter of the way through, because of some of the literary choices that were taken. It made the voice feel off as it was inconsistent to how the rest of the story had been written. There were only a couple of times where it really stood out and as the book continues, the voice becomes very strong and clear in the tone it wants to take.

The magic system of this world makes for some amazing display of power! The cover shows a battle that is truly awe inspiring in words of scope as well as heart pounding action. The novel itself is fast paced and heart pounding, with a couple of twists and turns that make it a fun read as well. Make sure you have your potions to increase your stamina, you will be up late reading this one!

Thanks for taking the time to read my review, Happy Reading! And as always, Stay Great!!