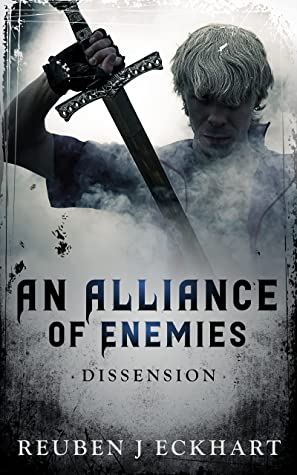 Ignoring Cylandia’s problems won’t solve them. Allowing hatred to go unchallenged will cede ground to Cylandia’s enemies and cause the acid of hate to burn them all. Radvere is about to be tested beyond anything he ever could have imagined, and it’s his own brother that’s doing the testing.

An Alliance of Enemies is a dark book that will make a person ponder on their actions in our own world. It tells a tale of dwarves and elves as their societies have merged since the war has ended. It shows a dark reality of how injustices are frequently doled out. The biggest strength of this book is the world. The author cares about it deeply, and it is very evident in the approach and prose that he takes to show us the different parts that it contains. The writing has several parts where it is beautiful and flows in a way that the picture becomes clear to the reader in only 260 pages.

There are times where this book became a bit confusing, making the reader have to focus to keep track of the conversations. There are also a lot viewpoints for a shorter book. This does allow for a lot of the world to be seen in the perspective of a lot of different people and can make it more enjoyable. I do feel as if it was longer, more attachment could have been made to a couple of the characters.

There are moments where this story reflected our world in a way that was new and unique in a fantasy world. It shows both the political side, as well as what is happening in the lives of those just trying to get by. It is a good read for those who like their fantasies dark and grim, searching for that one spot of good that may remain in a broken world.