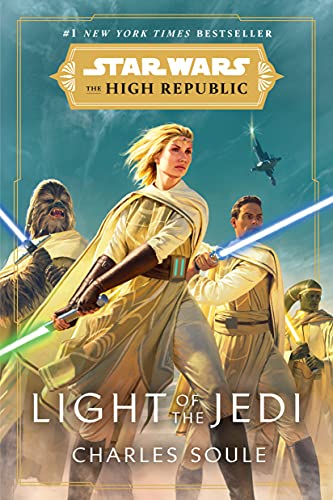 It is a golden age. Intrepid hyperspace scouts expand the reach of the Republic to the farthest stars, worlds flourish under the benevolent leadership of the Senate, and peace reigns, enforced by the wisdom and strength of the renowned order of Force users known as the Jedi. With the Jedi at the height of their power, the free citizens of the galaxy are confident in their ability to weather any storm. But even the brightest light can cast a shadow, and some storms defy any preparation.

When a shocking catastrophe in hyperspace tears a ship to pieces, the flurry of shrapnel emerging from the disaster threatens an entire system. No sooner does the call for help go out than the Jedi race to the scene. The scope of the emergence, however, is enough to push even Jedi to their limit. As the sky breaks open and destruction rains down upon the peaceful alliance they helped to build, the Jedi must trust in the Force to see them through a day in which a single mistake could cost billions of lives.

Even as the Jedi battle valiantly against calamity, something truly deadly grows beyond the boundary of the Republic. The hyperspace disaster is far more sinister than the Jedi could ever suspect. A threat hides in the darkness, far from the light of the age, and harbors a secret that could strike fear into even a Jedi’s heart.

I was really excited to start my Star Wars journey this year. I set myself a goal, and it was to read (or attempt) to read all canon Star Wars books this year or for as long as it takes me because I am a slow reader. I found a list on Wookipedia that gave me the perfect order to follow and started with Light Of The Jedi. In the beginning, we’re introduced to a couple of characters who encounter traumatic experiences. I was taken aback because I thought that everyone was going to die and that was going to be the end of it. This was not the case, the author wrote in a time line taking the reader from past to present and then it converted into a countdown. There were some losses but also some gain from this. I didn’t mind this method but I did find it a little difficult keeping up with the story and characters. I decided to change from physical copy to audiobook and in my opinion, I think it helped me out a lot. I instantly felt like I was submerged in the story. The characters magically came to life and it felt like a movie. I definitely think that if you’re a reader who has a difficult time submerging into stories, Audiobooks can become a lifesaver.

One of the many things I enjoyed about the story are the villains or should I say villain. I tend to always drift to the dark side when I find myself falling for the bad guy. In this case, it was Marchion Ro. I loved how he was represented by the narrator as well as how his character was written and developed. Marchion Ro never drifted off his path. He is a very determined character who only wants to succeed. He wants to be better than his father. He wants the Nihil to be feared and respected. I promise, I am not this evil person who only likes the bad guys. I really liked a lot of the Jedi characters mentioned in the story. Loden Greatstorm is a great character. I enjoyed following him and his Padawan Bell Zettifar. These characters reminded me of the relationship Obi Wan had with Anakin. Adventurous and rambunctious but in a good way. I did want to see a little more development for Avar Kriss. I personally felt like I didn’t get a lot from her. She seems like such an awesome character with so much potential because of the amazing abilities she possesses. I hope that as the series continues, we get a lot more from her. Lastly, I enjoyed Elzar Mann. The way he ended this story simply gave me the chills. He made me look forward to so much more from the High Republic series and I really can’t wait.

Overall, I really enjoyed the read. You can tell the author really enjoys the Star Wars universe. There were a lot of moments that really sparked my interest. although there are a few things I think it flawed, It wasn’t a lot to completely drift me away from wanting to read the upcoming books. I am really looking forward to lots of light saber battles and political drama with my Star Wars journey. I am also looking forward to a wonderful list of characters that I am not yet familiar with. I hope that my review encourages you to either pick up this book or start a Star Wars journey like I did.