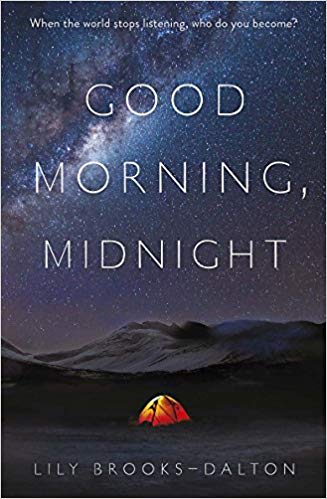 Augustine, a brilliant, aging astronomer, is consumed by the stars. For years he has lived in remote outposts, studying the sky for evidence of how the universe began. At his latest posting, in a research center in the Arctic, news of a catastrophic event arrives. The scientists are forced to evacuate, but Augustine stubbornly refuses to abandon his work. Shortly after the others have gone, Augustine discovers a mysterious child, Iris, and realizes the airwaves have gone silent. They are alone.

At the same time, Mission Specialist Sullivan is aboard the Aether on its return flight from Jupiter. The astronauts are the first human beings to delve this deep into space, and Sully has made peace with the sacrifices required of her: a daughter left behind, a marriage ended. So far the journey has been a success, but when Mission Control falls inexplicably silent, Sully and her crew mates are forced to wonder if they will ever get home.

As Augustine and Sully each face an uncertain future against forbidding yet beautiful landscapes, their stories gradually intertwine in a profound and unexpected conclusion.

Good Morning, Midnight is a book that I am not really used to reading but I gave it a chance because the synopsis really intrigued me. The first couple of chapters were very slow pace. Usually when this happens, I lose track and I feel like I don’t want to continue. I gave it a shot anyway because I truly felt interest in the wellbeing of the characters and the outcome of their future. This book is based in a post apocalyptical setting giving us no information about what exactly happened to earth. All we know is that something happened and there is no one left to reach out to. You would think that would be enough to keep me reading right?

I am really glad I decided to continue reading because it was a very touching book. Augie, one of the main protagonist, had a sad but interesting life. Augie always cared about himself and his work. He would look at everything in his life as an experiment including the people he would bring close to him. He was your typical heartbreaker in his younger days. As you continue to follow his story, you go through a series of flashbacks and really get to know him. When Augie takes you back, he begins to instantly regret certain decisions he’s made. Augie has great transformation in the long run but still very sad that he never gets closure.
Sully is the second protagonist and my favorite. She also had a sad but interesting life and I found that I relate to her in some ways. Sully is aboard a spacecraft on its way back to earth from Jupiter. Along with her crew, she has no idea what has become of earth. Her job is to find a radio signal for a safe re-entry. You also go in a series of flashbacks in order to get better acquainted with Sully’s character. I think what bothered me the most about Sully’s character was the fact that she was somewhat ok with leaving her daughter. As a mother, I find that sort of decision to be very difficult to make. In her case, she never really felt she was a mother to begin with which made it much easier for her to make that decision. I think that that’s one of the reasons why I felt I needed to know more about her. The Author definitely did a great job with her characters and their development.

Worldbuilding was not a main focus in this novel since it takes place in our world but I do have to say that it was beautifully written. I don’t really know much about the artic, but I felt very close to actually being there myself while reading this novel. There are also parts of the book that describe space walks and the ISS which made it super interesting to picture in my mind. I like to keep track of the ISS and sometimes watch videos so I had a broad idea on how it looked.

overall, I am really glad I decided to stick around and finish the book. I really felt like I truly enjoyed it. I think that this is a perfect read for when you want to take a break from heavy reading. It was short and sweet and very emotional. The author does a great job describing a realistic post apocalyptic setting. I encourage anyone who seems interested to just go for it and pick it up.