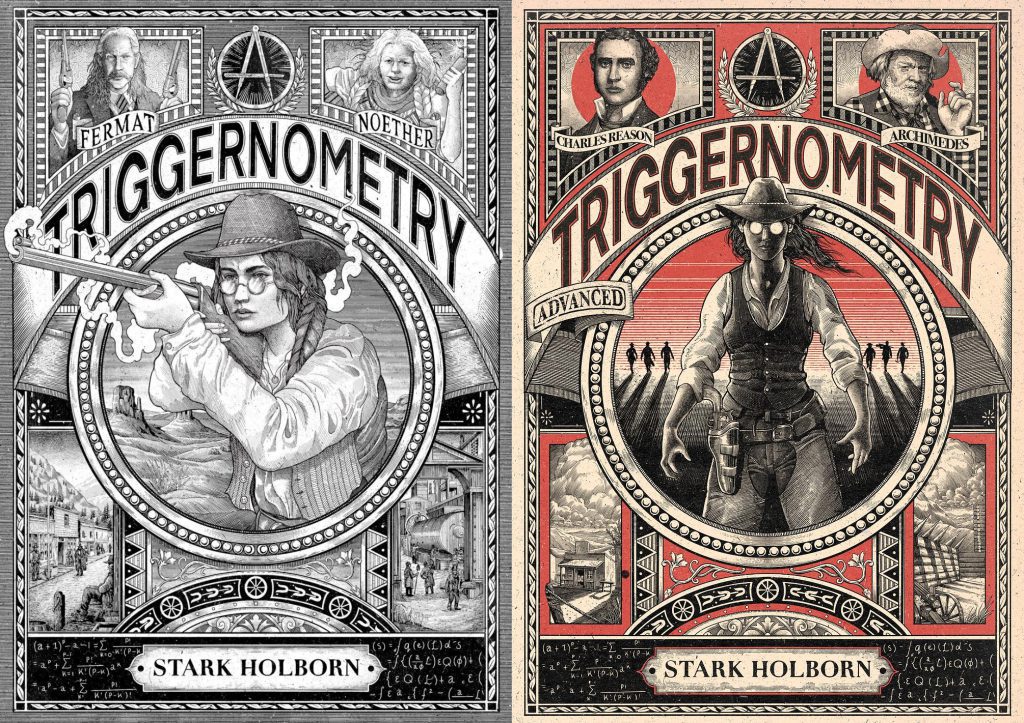 “I hereby arrest the fugitive “Mad” Malago Browne for murder, arson, robbery and acts of pernicious arithmetic against the Capitol States. Also the fugitive Pierre “Polecat” de Fermat, for sundry of the same.”

In the Western States, it doesn’t pay to count your blessings.

Professor Malago Browne, once the most notorious mathematician in the west, has been trying to leave her outlaw past behind and lead a quiet life. But all of that changes when her former partner – the deadly and capricious Pierre de Fermat – shows up with a proposition of a lifetime.

One last job, one last ride: a heist big enough to escape the tyranny of the Capitol forever.

Gun-slinging mathematicians in an alternate history Wild West shouldn’t work, right? Right? Well, I am here to tell you that it, in fact, does because that’s exactly what we have in Stark Holborn’s two Triggernometry novellas and somehow she manages to make math look cool.

Mathmo, he had daubed across my house. But it might as well have been Monster.

Like I mentioned before, the Triggernometry novellas are set in an alternate history Wild West where mathematics have been outlawed and the former professors and students of it have turned to a new field, triggernometry. All of the Mathmos, as they’re colloquially known, have either been rounded up and imprisoned, forced to work for the government, or they have become outlaws. Since math has been declared illegal, money is no longer commonly used, with people bartering in handfuls of beans or other sundries. It’s a bleak world and one that oddly parallels some of today’s ignorance surrounding the validity of science.

Both novellas follow ‘Mad’ Malago Browne, a former geometry professor turned mathmo turned station clerk. Browne has somewhat of a legendary reputation, having been an outlaw since the laws banning mathematics were put in place, and it’s really fun to see how others react to her upon learning who she is. At the beginning of Triggernometry, Browne has left the life of a Mathmo behind and settled down to a quiet life. All of that is shattered, however, when an old acquaintance shows up and forces Browne to come back for one more job. The character interactions are all richly written and the tension between Browne and Fermat, her old accomplice, are expertly handled. The plot could be pulled straight out of the best spaghetti westerns. Well, except that you’d need to season them with a dash of math. Advanced Triggernometry sees Browne back in the proverbial saddle yet again. Most of the supporting cast are made up of famous mathematicians from all throughout history, from Pierre de Fermat, a French mathematician credited with creating the basis for calculus, and Emmy Noether, a German algebraist, to Charles Reason, the first black college professor in the US, and Wang Zhenyi, a Qing Dynasty Chinese astronomer and mathematician. It was exciting for me to look up these characters and see all of the accomplishments of their real world inspirations. I will say that most (all) of the math in here went completely over my head, but this didn’t affect my enjoyment.

I took out the protractor. ‘Let X be a random variable with a finite number of finite outcomes,’ I murmured, and looked up. ‘Let them try to stop us.’

There’s something so absurdly cool about protector-wielding mathematician working out the appropriate angle at which to fire her gun in order to take out a room full of enemies with a single shot. The novellas take their namesake from the in-world martial art of triggernometry. Basically, think of gun fu taken to the extreme, where split second mathematical calculations tell the practitioner the exact angles at which to fire based on any number of factors (gun caliber, bullet velocity, weather conditions, etc.) Add to this all of the other ‘tools’ Mathmos use, such as the sword-like sharpened rulers, and you have some very over the top, yet still very exciting, action.

My only complaint is the lack of real character development and worldbuilding. Sure, we know that math is illegal and all, but it’s never expounded upon past that point. I want to know more! I want to know what happened and how we got where we are at this point in the story. I don’t know if this is the fault of the format or just the relentlessly fast pace that the books kept up, but there were several times where I was so frustrated because it seemed as if some substantial character development/worldbuilding was about to happen only for something to get in the way. The story is never given the opportunity to breathe, with one event happening on the heels of the one before it. I think that given the space she could craft a hell of tale because she was able to do so much here with so little (both novellas combined are only a hair over 100 pages).

‘What’s it called,’ she murmured, ‘when you know something is true?’
I met her eyes. ‘In mathematics, it’s called law.’

Overall, I really enjoyed my time with Triggernometry and its sequel Advanced Triggernometry. While I was ultimately a bit frustrated with the lack of character development and worldbuilding, I think Holborn has managed to pack quite a lot into these two little novellas. The setting is unique and the action is ridiculously cool. I would be hard pressed to find a better way to spend an afternoon and I look forward to reading more of Holborn’s work in the future.