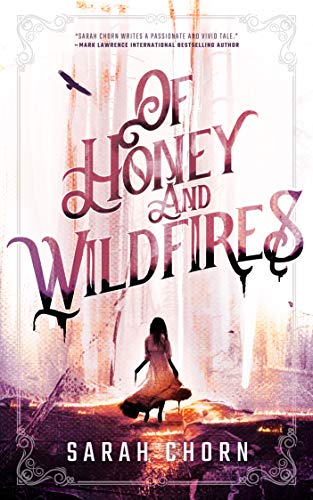 From the moment the first settler dug a well and struck a lode of shine, the world changed. Now, everything revolves around that magical oil.

What began as a simple scouting expedition becomes a life-changing ordeal for Arlen Esco. The son of a powerful mogul, Arlen is kidnapped and forced to confront uncomfortable truths his father has kept hidden. In his hands lies a decision that will determine the fate of everyone he loves—and impact the lives of every person in Shine Territory.

The daughter of an infamous saboteur and outlaw, Cassandra has her own dangerous secrets to protect. When the lives of those she loves are threatened, she realizes that she is uniquely placed to change the balance of power in Shine Territory once and for all.

Secrets breed more secrets. Somehow, Arlen and Cassandra must find their own truths in the middle of a garden of lies.

Review copy provided by the author in exchange for an honest review.

Of Honey and Wildfires is a rather short book, by fantasy standards anyway, weighing in at just over 300 pages. That’s not to say that this is a bad thing. Quite the opposite, in fact, because I don’t think I could have withstood reading much more than that. Let me explain. Generally speaking, I am a bit of a bleeding heart. I will be the first to admit that I cry in almost every movie, books often leave me sobbing, stirring music will move me to tears, and so on. However, this is a book that has moved me beyond my normal emotional response and left me empty; it has scooped out my soul, laid it bare, and revealed all of my insecurities. In other words, I loved it.

My heart has broken into as many pieces as there are stars. I imagine that is why this hurts. It is not an easy thing being torn so.

Of Honey and Wildfires is about love and loss, sacrifice and, ultimately, of finding home. This is a character driven story centered around the intersecting storylines of Arlen, Cassandra, Ianthe, and Chris, as well as their relationship with Matthew Esco, the owner of Shine Company, and finally Shine Territory itself. For most of the book, these lines are weaving back and forth through time, as we follow Cassandra’s upbringing and the blossoming of her relationship to Ianthe, and then Arlen and Chris’ journey deep into Shine Territory. The relationships are all very believable and nuanced and I really appreciated all of the LGBTQ representation that Sarah managed to squeeze into the story. And, most importantly, it felt very natural and didn’t come across as representation for representations sake.

It takes place in Shine Territory, a reimagined wild west where instead of striking gold, we struck shine. While there are references to the world outside the Boundary, Shine Territory is the main point of focus here, as the characters and their stories are tied to the land. Shine is a magical substance that has come to be used the world over. It is used in everything from fine textiles to food, weapons, healing, and good old fashioned drug abuse. Shine is an interesting twist on the normal magic systems found in fantasy and, while it is very loosely explained on page, it is pretty easy to understand the many uses and ways in which it could be implemented. This is a time where leaving the magic system mainly up to the reader’s imagination did not take anything away from it. The only time I was confused was when a few of the characters were referred to as half breeds, based not on their racial identity but the fact that shine didn’t affect them, and I never saw a satisfactory explanation as to what that actually means. On another note, the fact that Matthew Esco and Shine Company were the single source of shine for the entire world immediately sets them up as the BBEG in a satisfying way because who doesn’t hate the evil monopoly man?

Bloodshed is always superfluous. It is the deeper damage that is the best.

I have to mention Sarah’s prose here because it is some of the most beautiful writing I have ever experienced. She commands the written word with such skill that every sentence seems layered with meaning. The pages practically bleed emotion. Finding quotes to pull for use in this review was harder than it has ever been. If I had to nitpick, I could say that a few of the similes and metaphors that she used didn’t work for me. However, this is still some of the most evocative prose I have ever read.

I really enjoyed Of Honey and Wildfires. This has been the best start to a year of reading that I have probably ever had. Sarah has created something that is equal parts poetic and heart wrenching. I was immediately immersed in Sarah’s take on the weird west and the gut-wrenching path the novel took left me both gasping for air and begging for more. I will definitely be picking up the recently released sequel novella and waiting with baited breath for the full sequel to come.

The story of life is told through breath and blood. Poetry, as ever-present as a heartbeat, as fleeting as the blink of an eye.