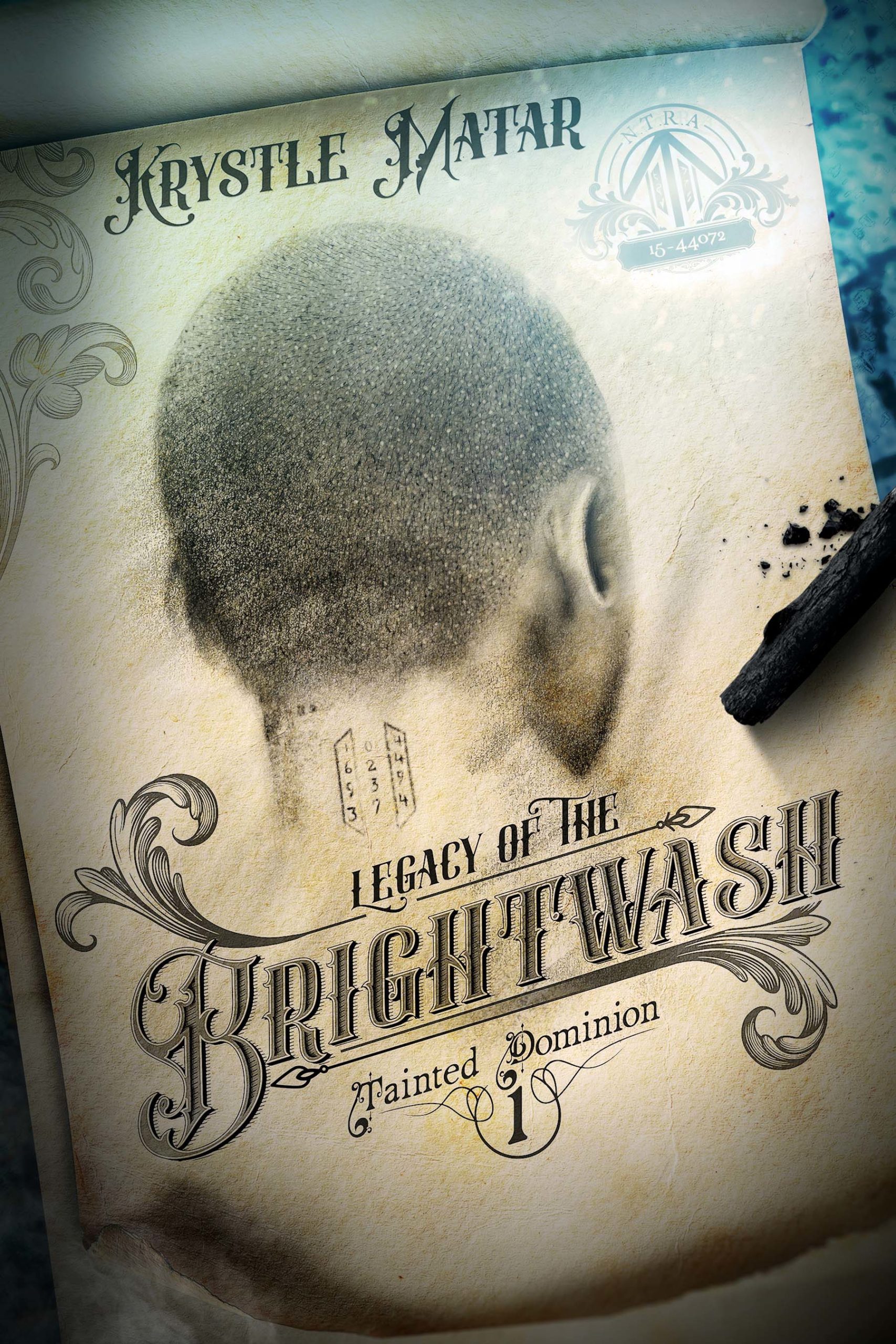 Follow the law and you’ll stay safe. But what if the law is wrong?

Tashué’s faith in the law is beginning to crack.

Three years ago, he stood by when the Authority condemned Jason to the brutality of the Rift for non-compliance. When Tashué’s son refused to register as tainted, the laws had to be upheld. He’d never doubted his job as a Regulation Officer before, but three years of watching your son wither away can break down even the strongest convictions.

Then a dead girl washed up on the bank of the Brightwash, tattooed and mutilated. Where had she come from? Who would tattoo a child? Was it the same person who killed her?

Why was he the only one who cared?

Will Tashué be able to stand against everything he thought he believed in to get the answers he’s looking for?

A person without scars is a person who hasn’t lived much.

It has taken me a while to compose myself long enough to sit down and write this review. There is so much that I could say about Legacy of the Brightwash, so many things that I absolutely adored, and it’s not often that I am moved to silence by something. Krystle Matar has written something truly magical, a tour de force of character building which makes me yearn to be in her world, if only to meet Tashué and crew personally.

The characterization on display throughout Legacy of the Brightwash is some of the best that I have ever seen. The entire cast, down to the characters with the least amount of page time, feel like real people. Krystle has managed to breathe actual life into her world and I truly feel like I know Tashué, Stella, Jason, and all the rest. The interpersonal relationships are filled with nuance and history, and often pathos. Tashué is not a young man when we meet him. He has lived a life full of hardship, heartbreak, and loss, and so have many of the other characters. Our heroes show their scars, from the grizzled war hero to the single mother on the run from her past to the son paying for the mistakes of his father. Innocence flows from the world as swiftly as the currents of the Brightwash flow through the city of Yaelsmuir. One thing that I found really refreshing is the absence of the militant revolutionary from humble beginnings, rising up to take the fight to the bourgeoisie. Tashué is a cog in the machine of empire, a loyal G-man, and yet when he finds out that the government which he gave so much of himself to is not as infallible as he once believed, he doesn’t take out his gun and assassinate the rulers, he goes to the press. There is something to be admired there, I think.

Stella knew enough about loss and grief to know that you never really recovered, so much as you learnt to go on living even though you were falling apart.

The world that our characters inhabit influences them as much as the things they have lived through. Yaelsmuir, the Victorian-esque gaslamp city in which the story takes place, and the Dominion proper is one of those eerily prescient constructs in fantasy that mirror real life in so many ways that you wonder if the author has some foreknowledge of what is to come. A bureaucratic, imperialist nightmare constantly taking from the poor to fund their foreign wars of expansion, and yet also one in which genuinely good people work to try to fix things. Laws are written and rewritten, politicians jostle for ranking, and crime syndicates undermine everything while favors are traded for a blind eye.

While a lot of the some 700 pages of Legacy of the Brightwash are taken up by exposition and dialogue, there is also plenty of action and quite a bit of steaminess between various characters. This is not a boring book, with new revelations and twists flying at you at every turn. Most of the action comes in the form of pugilistic scraps, gunfire, city-wide foot chases, and one particularly spectacular explosion. It also features one of the most believable romances that I’ve ever read. I don’t normally “go” for romance in fantasy, as it’s often cheesy or unrealistic, but Krystle handles it with deftness and grace. Tashué and Stella can sit proudly next to the best of the best.

There were some people in your life that you searched for constantly, praying that they would appear just so that you could know they still graced the world.

I also want to mention some of the social commentary that is woven into the story. A lot of narrative focus is placed on the other. Front and foremost are the Tainted, or the Talented depending on who you ask. These are the people who are born with magic and have “quickened”, or reached magical maturity. Talent/Taint can be bent to many things depending on skill, training, and raw potential, such as healing or even powering the different technologies that the Dominion relies on (i.e., the brights, a type of clean burning light source, and the powered train the runs through Yaelsmuir.) Even so, the talented are officially known as the Tainted and are required to register with the Regulation Authority, the branch of government whose sole purpose is to control them, after which they have their own personal Regulation Officer (like Tashué) assigned to watch their every move to ensure that they are always in compliance with the law. They are not allowed to have unapproved use of their magic, they are forbidden from unapproved fraternization, and they must always perform the job they were assigned. Failure to comply leads to imprisonment in the Rift, the Residential Institute for Feral Tainted, a sort of Alcatraz style stone fortress in the middle of the Brightwash, or maybe the Directed Breeding Program, where the powerful are forced to pump out child after child for the Dominion to take and bend to their will. The Talented/Tainted are thus dehumanized, made less than so that the Authority can exploit their abilities for their gain. More subtly though, Krystle tackles issues of race, colonialism, cultural identity, and non-heteronormativity.

This is a heartbreakingly beautiful story full of pain, betrayal, love and found family and friendship, of sacrifice and reclamation, and of what depths a parent will reach to protect their child. Not a word is wasted here, with everything written lending a depth of character and storytelling that I don’t often see. Books like this make me believe in the magic of storytelling, cementing in me the idea that reading can be a transformative experience. Legacy of the Brightwash is as close to perfection as a book can get.

And in the quiet moments after, when he was trying to sleep and his whole body ached, his mind flashed him through all the fights he could still remember. But instead of clear pictures and rational thoughts, it was just a jumble of pain and blood and guilt. Because the fights in Cattle Bone Bay ended with a count and the ring of a bell. The fights before ended in graves.